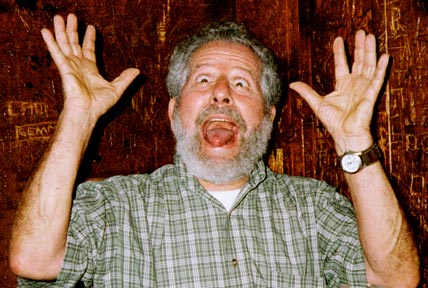 Cliff took this picture of me at the "O".

Here are some of the captions I've received:

Mike Bergen: "We got him"

[The US says they found Saddam, I agree with Fred Bird who says they actually found Jerry Garcia - David]

Clark Kerr: "Class of '61 reaction of Joy!!!/Horror??? on hearing that El Cerrito High School building is slated for demolition."

A man goes to his doctor. He turns to the doctor and says, "Doc, it hurts when I do this." The doctor says, "Then don't do that!"

David Grayson: "Oh my God -- I just realized how much more email I'll get from this website!"

Yagil Hertzberg : "David's reaction when he realizes that Cliff can operate a camera."

Patrick McEvoy: "Too tight! Too tight!"

Diane Stern: "Look, I just got my tongue pierced! The doctor says in two weeks I'll be able to insert a tongue ring that says 'David' to match my belt buckle. In the meantime all I'm allowed to eat is cheese and chocolate."

Irina Raicu: "Show them you're nuts," of course...

[Irina is the only one to send me the original caption for this picture! - David]

Mathieu de Brouwer: "His reaction on our confirmation of visiting him next summer, but I can't touch the feeling behind it, yet."

Paula Jacobson: "David experiences the pain involved in attempting to view his own tongue
using the hands-free method."

*[Another Bike Friday owner after hearing about my trip to Israel. - David]

Ori Gold: "No. I was released from the asylum."

Dori Lovejoy: "Oh NO!! What was I thinking leaving a woman alone in my house for a week. Nothing will ever be the same again...{{:>0))"

If you think of a good caption for this picture, send it to me.